Everything on Tripura Ethnic Dresses & Ornaments

Everything on Tripura Ethnic Dresses & Ornaments 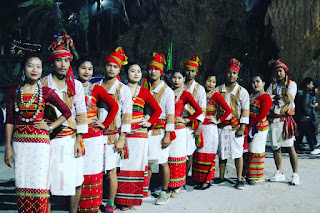 Tripura is one of the 29 states in India consisting of various indigenous tribes Debbarma,Jamatia, Reang, Koloi, Halam and many more who have and follow their own tradition of food habits, worship and clothing etc. So today we will look into the fashion wear and dresses of Tripura.

The common traditional dress worn by all of the indigenous tribes of Tripura is called “Rignai and Risha” this dress is worn by the women, rignai for the bottom and risha for the top(to cover chest). For men, the shirt worn by them is called “Kamchwlwi Borok” and “Dhuti” which the wore in the bottom. The women also use ornament especially the necklace made of silver coins. Men also use “Risha” at their waist as a belt and to cover their heads. “Risha” is also used in traditional occasions and functions with western wears as a symbol of Tripuri Culture by the Tripuris.

Rignai is used by the Tripuri People for covering the lower half of the body. There are many varieties of design, almost every rignai is a design. During the time of Maharaj Subrai or Trilochana, he designed almost 240 designs of Rignai Isn’t cool. Most of today’s rignai design are made long 4000 years back. The rignai standard length is almost 1.6m and breadth is 1.2m. It is made according to height of lady it would wear. It is woven into 3.2m long, which is cut in two equal size then stitched side by side to make it 1.2m width.

Some of the designs are viz. Chamthwibar, mikhunchok, takhumtwi, khaklubar, kuwaifang, etc. Do you know? In earlier days a woman’s IQ used to be judged by her woven design of rignai. It was an indication of her intelligence and her future prospect of a wife and her womanhood as a whole.

Commonly, the risa is used to cover the breast of women. It can be equated with a bra of modern women. The risa is turned around the chest so that the front part of the chest is covered by two layers of both ends of risa. Usually It is about 1.5m long and 0.3-0.5m width. It covers from top of chest to half way between xiphisternum and umbilicus. Risa has different designs, these are so beautiful that one forgets to blink to look at risa. Some of the designs are kwchak pali kosompali, takhumtwi, khamjang etc. There was an occasion among Tripuri people to celebrate the adolescent ceremony of a girl child, known as ‘RISA SORMANI’ panda.

It is the garment used for part of the body of Tripuri women. It covers almost whole of the body. There are different procedures to wear Rikutu among Tripuri women. One is that it can be worn wrapping around the whole of the body, which is used during winter season. Another way is to use like ‘Chunri’ folding over the chest covering the bosom, both ends hanging down the shoulder to the back. Another way is to rap around upwards from the waist through back to the front passing below the armpit in anti-clockwise then covering the chest it is hanged down over the left shoulder. It is like Pallu of Indian sari, which itself was modified version of this Tripuri rignai and Rikutu. Rituku is also worn to cover the head of women, especially those who are newly married.

All through the dresses name is common yet each of the tribes has their own designs respectively to differentiate their cultural dresses from each other. Thus, making Tripura a colorful and fashionable place.